SHARING WATER WITH PIGS: AN ACT OF COMPASSION, NOT “CRIMINAL MISCHIEF” 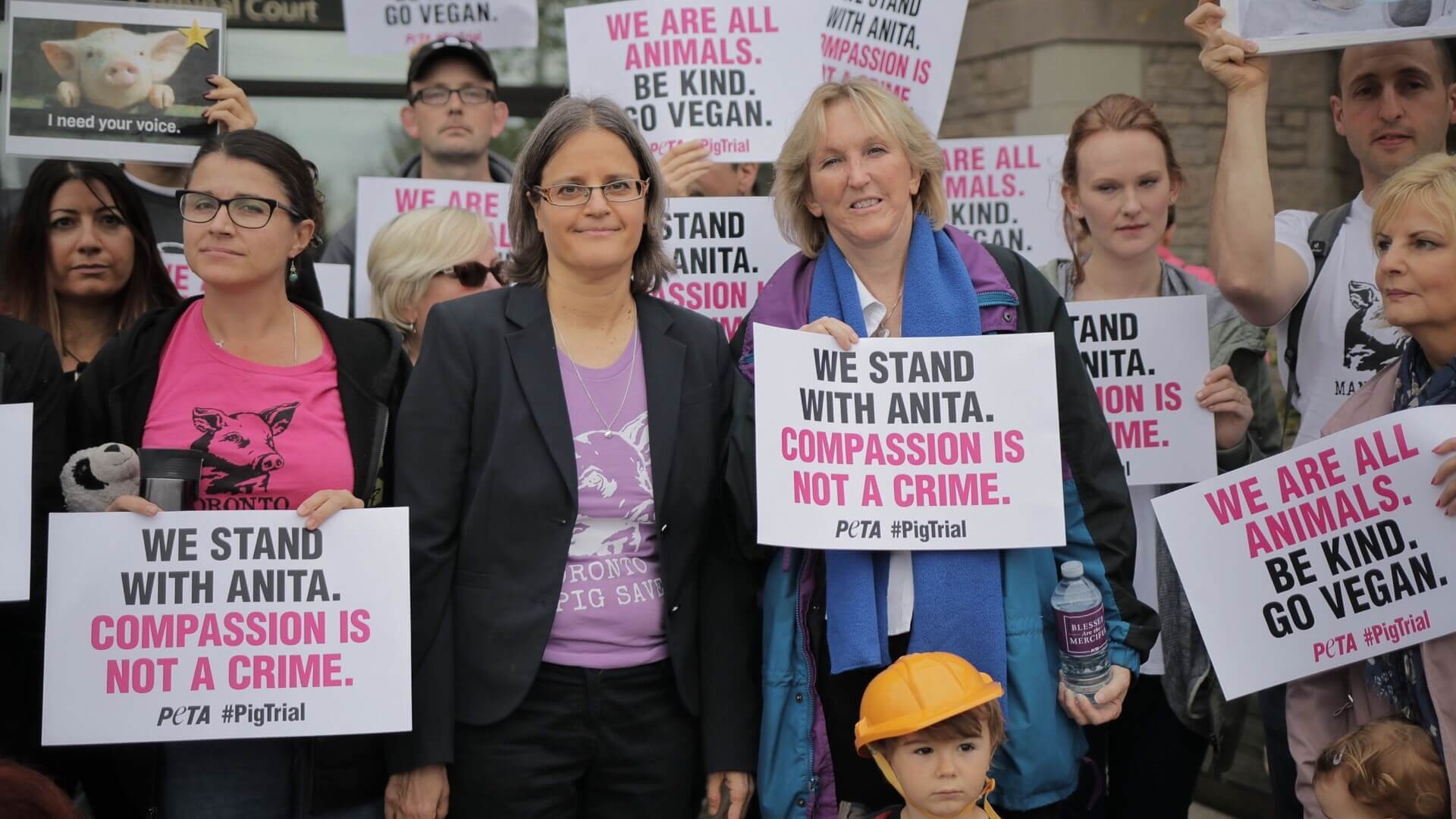 Sharing water with innocent pigs on route to slaughter…an act of “criminal mischief” or an act of kindness and compassion?

The court has sided with the latter.

Anita Krajnc is a longtime animal activist, holds a PhD, and was an aid to a former Canadian Minister of Environment. It goes without saying that her passion for environmental and animal justice seeps into all aspects of her life.

One of her most recognizable roles is being the co-founder of Toronto Pig Save, which “exists to erect glass walls at area slaughterhouses, encourage plant-based vegan living, and bear witness to the pigs during vigil.”

When activists stand firm in their beliefs through times of political pressure and distress, their true commitment to the cause shines through. This couldn’t be closer to the truth for Anita.

In June 2015, Anita gave water to pigs who were trapped in a transport truck on route to Fearman’s Pork Inc. slaughterhouse.

For this act of compassion, she was confronted by the truck driver (CLICK HERE to view the video) and charged with criminal mischief by Eric van Boekel, the owner of the farm from which the pigs were being transported from. He brought forth that Anita and supporters were unlawfully protesting and involving other people’s property. She was charged with mischief that would result in jail time or a maximum $5,000 fine.

Speaking to the “severe distress” the pigs were in, as many are while on route to slaughter, Anita told CBC:

While awaiting the discovery date, petitions were made in Anita’s defense through Care2 and Change.org.

On May 4, 2017, Justice David Harris of the Ontario Superior Court of Justice found Anita NOT GUILTY of criminal mischief—and rightfully so!

Providing animals with comfort in times of distress is simply the right thing to do. When fellow citizens are in need of help, we help them without question, and we should show the same courtesy and compassion for animals as well.

Celebrated as an idol and an inspiration to many of us at PMK, including all of our Vegan Warriors (Samantha, Debbie, and Abby), Anita has dedicated so much of her life to defending living, breathing, and feeling beings. Through her determination and commitment, Anita’s case has reminded the world that animals deserve utmost love, kindness, compassion, and consideration.

We are so grateful to Anita and the Toronto Pig Save for all the work they do to fight for animal justice and the vegan movement.

Showing compassion is not a crime, it’s simply the right thing to do.