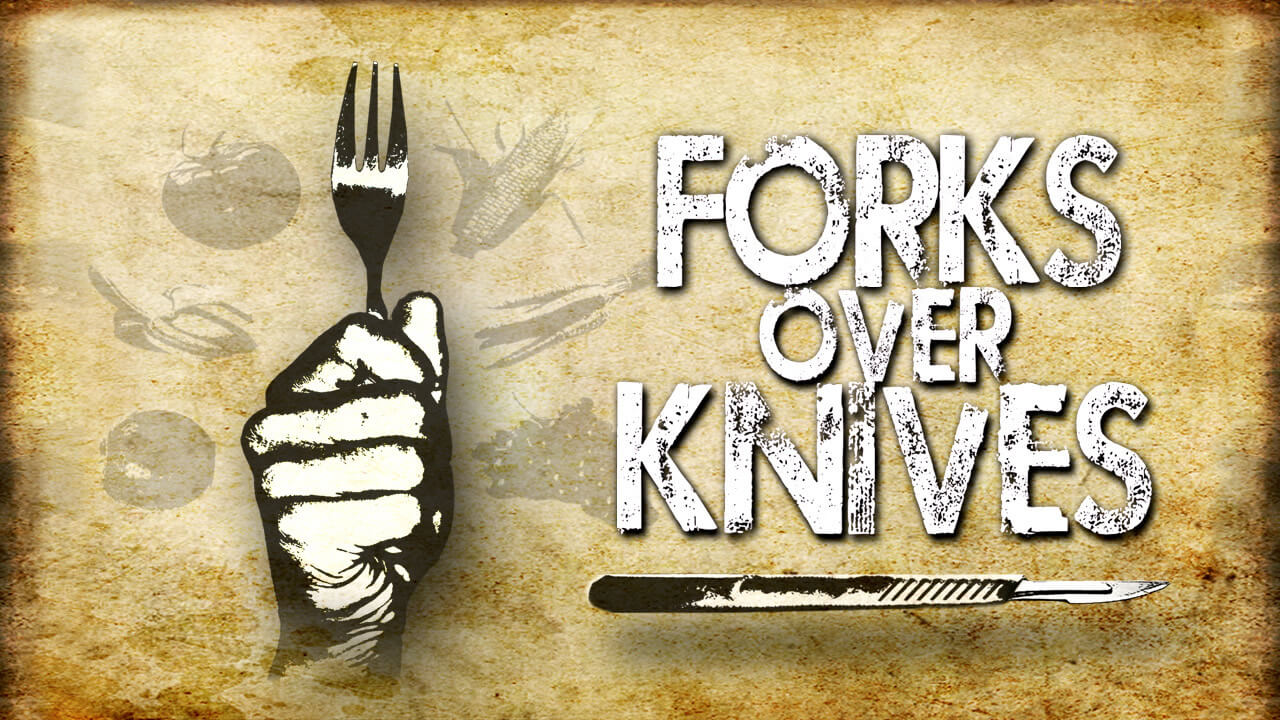 “The doctor of the future will no longer treat the human frame with drugs, but rather will cure and prevent disease with nutrition.” ~ Thomas Edison ~

These conditions (and a host of others) can be tackled by simply eliminating animal and animal by-products from our diets. It might sound too simple to be true—but it is true!

The groundbreaking documentary Forks Over Knives gives us a glimpse into the health, political, ethical, and social consequences that come with the consumption of meat and dairy.

A New Way of Eating

In an era of highly concentrated sugar and fat, where people are eating foods rich in calories but poor in nutrients, Forks Over Knives shines light on a health crisis and epidemic that we have the power of healing with a wholefoods, plant-based diet.

The answer to curing the mass onslaught of disease and illness? As Bill Maher says “The answer is spinach.” He couldn’t be closer to the truth!

Dr. Terry Mason, Commissioner of Health in Chicago, openly supports a plant-based diet and contends “If it walked, hopped, swam, crawled, slithered, had eyes, a mom and a dad—don’t eat it.” At Plant Matter Kitchen, we share Dr. Mason’s philosophy 100%.

Dr. Colin Campbell and Dr. Caldwell Esselstyn both grew up on farms: Dr. Campbell in rural Virginia and Dr. Esselstyn in upstate New York. Both have performed groundbreaking research in the power of plant-based eating and living.

The late 1950s brought on the dawn of fast food era and post WW2 supermarkets, which were filled with “convenience foods.” As the number of fast food chains grew, so too did the rates of cancer.

In his global research, Dr. Esselstyn found stark differences in the correlations between poor health and the intake animals and animal byproducts:

The connection? These countries were not eating a Western diet, consisting of meat and dairy products.

The German occupation of Norwegian livestock during WW2 forced Norwegians to eat only plant-based foods. Echoing his above findings, Dr. Esselstyn drew yet another correlation: there was a drastic decrease in mortality from circulatory diseases during the five years that Norwegians abstained from animal-based foods.

Dr. Campbell went to at Cornell University where he studied animal nutrition and biochemistry, with a focus on protein, which is too often synonymous with meat.

In the 1960s, he traveled to the Philippines to help feed hungry children. Interestingly, he found that the citizens who could afford to purchase meat were the ones bearing children who were susceptible to liver cancer.

Studying his findings from the Philippines in the labs at Cornell University, Dr. Campbell found that while cancer may start in our genes, the growth of cancer cells in our bodies is determined by what we put in our mouths.

Further studying the differences between animal and plant-based nutrients, Dr. Campbell found that nutrients from animal food promoted cancer growth, whereas nutrients from non-animal proteins did not.

To further test his methods, Dr. Campbell went to China.

In 1974, Chinese premier Zhou Enlai was diagnosed with bladder cancer.

With the intention of educating his citizens on cancer, he initiated one of history’s largest recorded scientific studies, wherein 650,000 researchers cataloged the mortality patterns caused by various types of cancer between 1973 and 1975. They looked at every county in China and studied over 800,080 million people.

The study resulted in the 1981 publication: The Atlas of Cancer Mortality in the People’s Republic of China. 25 years later, in 2006, Dr. Campbell and Thomas Campbell published the The China Study: The Most Comprehensive Study of Nutrition Ever Conducted.

The book is loosely based on The China–Cornell–Oxford Project, which was one of the most ambitious health studies ever conceived, by Dr. Campbell, Chen Junshi (Deputy Director of Institute of Nutrition and Food Hygiene at the Chinese Academy of Preventive Medicine in Beijing), Richard Peto (Oxford University), and Li Junyao (China Cancer Institute).

Coined the “Grand Prix of epidemiology” by The New York Times, the project:

The results of the study identified 94 correlations between diet and disease, 8 to 9,000 of which were statistically significant.

This study influenced Dr. Esselstyn to eliminate dairy products from his patients’ diets.

Dr. Esselstyn conducted a 5-year study on reversing heart disease. He put patients on a plant-based diets and studied the results.

By the end of the study, he had 18 patients, 11 of whose heart disease had halted and 4 of whose regressed. “These results were astonishing,” said Dr. Esselstyn, “the diet produced something that medication and surgery never had before: actual reversals of heart disease.”

The reversal was caused by the body’s endothelial cells, aka “the lifejackets of our blood vessels”, which line our veins and arteries and manufacture nitric oxide that keep our blood flowing smoothly.

All 18 of his patients survived the initial 12 years of the study; today, 14 are still alive over 2 decades after the study began.

And So Much MORE!

In addition to Dr. Caldwell and Dr. Esselstyn’s contributions to the promotion of plant-based eating, Forks Over Knives takes a look at how:

Check out the documentary for yourself—we’re positive you won’t be disappointed!

Forks Over Knives is eye opening, inspiring, and makes us so glad that we’re doing everything we can in London, ON, to support plant-based eating and living at #PlantMatterKitchen.